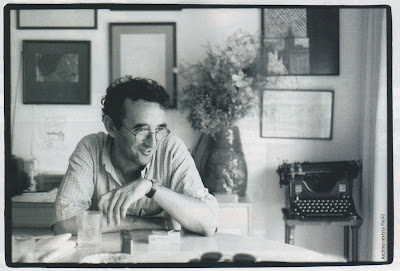 Because it is a capitalist career and the inertia of the avant-garde, the academy seeks the “new.”

Ten years after his physical disappearance and fifteen since his hit, Roberto Bolaño is a Latin American writer for readers with literary aspirations.

Literature was a midwife and progenitor for Borges, Rulfo, the Neo-Baroques and the Boom, for which the academy only managed to be ambassador and refrigerator. But Bolaño was already given birth to by the true savage detectives: capitalist readers.

Bolaño dreamed of typing good literature on a cash register. He was planning cryogenics: cool Latin American literature in times of agony. The novel as nostalgia for the novel.

Personal comparative literature. Having that language is gold: the Bolaño oeuvre consists of characters or worlds that are episodes of national literatures and a Calvary for writers. It seems like a “reflection” but it’s retro.

Bolaño’s prose isn’t out of this world. Nor are his structures or beings. His success was transforming the essays of Carlos Fuentes (the sexiest essayist from the Boom) into novels and publishable drafts. He was a designer.

We liked Bolaño because he marked a moment when readers, journalists, critics, students, writers and academics all read the same book at the same time.

Latin American literature in real time and overtime. All his books are memories of other fashions and resistances.

Sufficiently exiled to be Latino literary coffee, Bolaño tastes like a “savage.” But a savage wearing jeans, an exotic with a brand.

He knew that in order to “save himself” all he needed was a novelistic contest, the possible market. He made a novel about a Hispanic dandy who pretends to be a leader of poets, and who doesn’t actually write a total novel (but creates the illusion that he could).

Bolaño, as an “important” writer, is a product for export.

When others were preaching the death of the Latin American novel, Bolaño raised the flag anew, and the best part is that he didn’t have a clear nationality. Almost a white flag, asking postmodernism for Paz.

Bolaño’s pages appeal to the complete gamut of cultural agents.

And because the figure of the actor, the writer and the singer are blended into one with him, his literature is read like photography.

Bolaño didn’t write a single genre with excellence, but he remembers them all and this age likes that.

We, the savage detectives, that is, desperate collectors and romantic readers.

Bolaño consisted of being ultra-literary in a very unliterary age, artificial respiration for several literatures —Mexico, Chile, Spain, the United States— in a minor era.