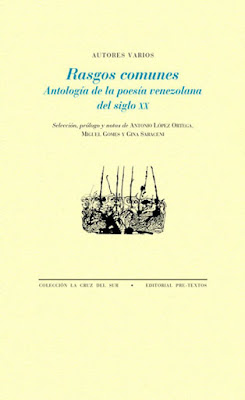 Venezuela has become a powerhouse of the poetry in Spanish that is relatively well-represented in Spain from a publishing point of view. Joining anthologies such as La poesía del siglo XX en Venezuela (Visor, 2005), selected by Rafael Arráiz Lucca, and Conversación con la intemperie (Galaxia Gutenberg, 2008), under the care of Gustavo Guerrero, we now have Rasgos comunes, a monumental volume that extends from Francisco Lazo Martí, born in 1869 and died in 1909, to Luis Enrique Belmonte, born in 1971. Antonio López Ortega, Miguel Gomes and Gina Saraceni have completed their selection with figures such as Enriqueta Arvelo Larriva, José Antonio Ramos Sucre, Vicente Gerbasi, Juan Sánchez Peláez —­honored in the book’s title—, Rafael Cadenas, Guillermo Sucre, Eugenio Montejo, Igor Barreto, Ana Nuño or Alejandro Oliveros. Between the amorous (and dolorous) intimacy of Arvelo Larriva and the Anglo-Saxon tinged narrativity of Oliveros there’s an entire century of poetry with all its seasons: surrealist, metaphysical, popular...

If I had to choose one living name, it would be Yolanda Pantin (Caracas, 1954), who dominates the art of conjugating mystery and realism, irony and emotion, and the author of at least one masterpiece: the book Correo del corazón. Her poetry is collected in País (Pre-Textos, 2014).