About 15 minutes before we landed in San Salvador, our plane flew by a massive volcano somewhere in the countryside surrounded by nothing but farms and wilderness. Looking on a map later on, I guessed this might be the Chinchontepec volcano, a beautiful sight from the airplane window. San Salvador itself is in a picturesque valley of volcanoes and hills, under and through which the city grows at an astonishing pace which you can measure by the construction going on everywhere. As the sun rises, you wake up to a multitude of birds singing just as many songs on the tree branches outside your window.

I was in San Salvador to assist C. with research she's conducting on Roque Dalton (1935-1975), so that most of the week was spent learning about his chaotic and prolific life and career. As I learn more about his life and work, his writing strikes me as one of the most important and vibrant literary projects Latin America has ever seen. As I've written here before, I'm especially fascinated by the brief encounter that occurred sometime in late 1973 or early 1974 between Dalton and Roberto Bolaño in San Salvador. Dalton had returned to El Salvador from Cuba on Christmas Day 1973, in order to join a small group of leftist guerrillas in the struggle to bring a revolution to his country.

I haven't been able to find any information on when exactly Bolaño arrived in San Salvador (he never published an account of his time there and his references in interviews are brief), but I believe it would have been after his escape from Chile, as he made his way back up to Mexico fleeing the overthrow of Salvador Allende. From the time he arrived in El Salvador in late 1973 until he was assassinated by his own "comrades" in the ERP, Dalton lived clandestine in San Salvador. Having been marginally associated with a revolutionary group for a few months in Santiago de Chile and having escaped jail and certain death there, Bolaño would have been clandestine as well during his time in San Salvador. 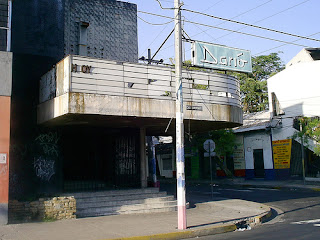 Bolaño was approximately 20 years old and Dalton was about 38 when they met. I imagine poetry and the events in Chile would have been topics of conversation between them. (Dalton studied at the University of Chile in the 1950s.) From what I've gathered, when he was in hiding in San Salvador, Dalton was writing the explicitly political poems that would later be gathered under the title Poemas clandestinos, along with essays on political theory. He left El Salvador during that period on at least one occasion, going to Mexico City. When he left Havana in late 1973, he abandoned his family and two incomplete novels waiting to be finished.

In a book-length study of the poet that I found during my visit, El ciervo perseguido: Vida y obra de Roque Dalton (San Salvador: CONCULTURA, 2004), Luis Alvarenga discusses how Dalton once posed the following choice during a lecture in Havana: whether he should focus his energy on his newfound interest in experimental fiction, or if he should devote his attention to participating in revolutionary activity in his homeland. He chose the later, and his senseless death points to his having made a mistake. As his masterpiece novel Pobrecito poeta que era yo... (1976) proves, he was well on his way to creating a completely new collage-style, experimental type of novel. His completed novel will one day be understood as a masterpiece of the Latin American Boom, as important and extraordinary as anything by his friends Julio Cortázar or José Lezama Lima.

A book like Pobrecito poeta que era yo... is definitely an influence on Bolaño's two major texts, Los detectives salvajes (1998) and 2666 (2004), in that they are all obsessed with documenting the literary and political vanguards of Latin America in the second half of the XX century. Both writers use poetry as a base for their fiction, allowing experimentalism to saturate their frantic and multitudinous prose. All three novels provide eclectic portraits of literary bohemias in San Salvador, Mexico City, and elsewhere. Much of my time in San Salvador last week was spent with these two writers in mind, imagining what their encounters and relationships with that city were like.

I was also visiting as many bookstores as time would allow. I came across a series of books on Venezuela that I've been trying to procure for years now, published by Editorial Debate. I also purchased several Dalton titles published by UCA Editores, and the first volume of his collected poems [Roque Dalton, No pronuncies mi nombre: Poesía completa, ed. Rafael Lara Martínez (San Salvador: CONCULTURA, 2005)]. I found a handful of other texts that I hope to discuss here in the coming months. 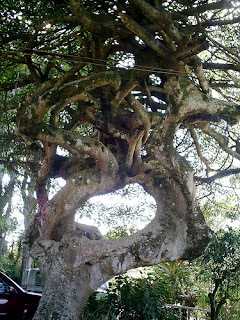 San Salvador is a massive city and one week was barely enough time to begin to investigate its multiple zones. One day we had the fortune of driving up to the top of the San Salvador volcano that overlooks the city (see 1st photo above), where we looked down into the crater known as El Boquerón, which hasn't been active since 1917. Stopping for a drink at a coffee plantation on the other side of the volcano, you can look out across the beautiful countryside to where Honduras begins. The natural landscape always overwhelmed me around San Salvador, rugged and dry (at this time of year), prolific and never quite conquered by the city.

I was often reminded of Caracas as we explored San Salvador. It has the same chaos of automobiles and pedestrians, the same polluted air filtered through vast green mountains, and a similar hyper-contrast of wealth and poverty. Like the center of Caracas, San Salvador's center is overrun with street vendors. That area's beautiful XIX century and art deco buildings are in dire need of restoration, covered in grime from the polluted air and mostly unsafe for pedestrians who don't know their way around. Countless buildings seemed to have been abandoned, such as the Teatro Darío movie theater (see photo above).

Literary culture is marginalized in San Salvador, as it is in almost all the major cities of Latin America. The bookstores always had titles I was interested in, but there was an extreme lack of selections from many Latin American authors. For instance, I was looking for several books by contemporary Mexican writers and was surprised to find that none of them were available, even though Mexico is not that far away. To take the case of Dalton, people in El Salvador know who he is but often haven't read his work. He's frequently seen (and manipulated for political purposes) as a revolutionary poet, but the broad range of his work – poetry, fiction, literary criticism, political theory, journalism, memoir – is ignored.

Of course, there are institutions in San Salvador devoted to literature, such as the café La Luna, the Museo de la Palabra y la Imagen, or the Casa del Escritor. But my impression is that those places are exceptions. In El Salvador, as in the rest of Latin America, poetry is a minority interest. I could obviously be wrong in this assessment, since I was only there for 8 days. But going back to Dalton, he was relentless in his critique of El Salvador's political and literary landscapes, pointing out how the middle and upper classes constantly gravitate toward conservatism and mediocrity. One could argue, surely, that this is simply a symptom of our globalized age, when capitalism has saturated every corner of our existence. And really, where in our world today is poetry not marginal and misunderstood? 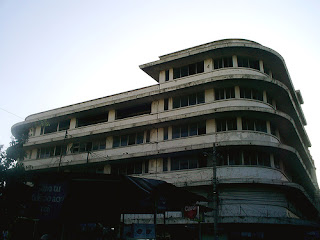 There was a mood or feeling that kept washing over me while I was in San Salvador. I couldn't help but remember that the peace accords for El Salvador's bloody civil war were only signed 15 years ago. Dalton's death in 1975 marked the beginning of an extremely violent decade-and-a-half, but it was merely one among thousands and thousands of killings. The main parties in power today are ARENA (associated in the past with the government death squads of the civil war) and FMLN (derived from the revolutionary movement that itself was also guilty of many war crimes). The political process seems to be deadlocked between these two sides, though my ignorance of the minutae of Salvadoran politics prevents me from commenting further.

While the country's economy is doing quite well, specters of the nation's violent history continue to haunt it today. One direct example is the frightening rise in organized criminal violence (such as the infamous and transnational Mara Salvatrucha gang), a direct consequence of the civil war years. Dalton's youngest son, the filmmaker Jorge Dalton has just released an excellent documentary, “Entre los muertos,” that addresses the way death has become such a familiar presence in El Salvador. His film has been shown at festivals in Spain and Nicaragua, and hopefully will make it here to the U.S. because it's well worth seeing.

Its tense atmosphere is partly why San Salvador reminds me so much of Caracas. They're both dangerous and violent cities organized around the extreme wealth of a minority and the grinding poverty of a majority. One can see no clear exit to these situations of poverty, inequality and injustice with such established historical roots. I find it completely sad and reactionary, however, that solutions to economic oppression are sought by the masses in dictatorial figures such as Che, Fidel or Chávez.