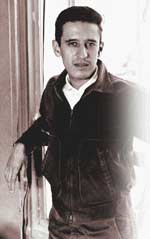 As the the 32nd anniversary of Roque Dalton’s murder draws near, our family and the Australian publishing house Ocean Press, of which Ocean Sur is a subsidiary, have signed an agreement to publish the entire Daltonian oeuvre, the poetry, the essays and the political writings.

The texts are more than a few. By the age of 39 – he was 4 days shy of turning forty when he was murdered – he had produced such an amount of books that at this moment we don’t have an exact number for them.

But his production ceased when a commmando of murderers including Joaquín Villalobos (alias Atilio) and Jorge Meléndez (alias Jonás), acting under the orders of Edgar Alejandro Rivas Mira, ended his life, riddling him with bullets in a house in the Santa Anita district of San Salvador. Perhaps there were other murderers, but these are the ones who are still alive: Villalobos lives in England; Meléndez is a councilman for the San Salvador mayor's office – to the historic shame of the FMLN party – and Rivas Mira is hidden beneath the plastic surgery he underwent, using the profits he made from the kidnapping and murder of businessman Roberto Poma.

Regardless, it has been said that each person should write at least one book in his life and my father wrote more than 20 in his short life.

Ocean Press is the publishing house that has been able to disseminate the writings of Ernesto “Che” Guevara with great success, not only in Spanish, but in English as well. The contracts signed between the Dalton family and Ocean Press also include the dissemination of his work in English and Spanish.

We had never before signed a contract such as this one. While it is true that Dalton’s work is the most famous and disseminated of any Salvadoran, his publications have been sporadic. The majority of his literary work is known in Mexico, Spain, the United States, Cuba and in El Salvador.

My father’s political writing is truly quite unknown: “Revolución en la Revolución y Crítica de Derecha,” “Profesión de sed,” “Revolución e Imperialismo en Centroamérica” and other texts, which include collections of articles and letters, will be divulged not just in El Salvador, but throughout Latin America and in English-speaking countries: the United States, Canada, England and Australia.

This is good news for the lovers of Roque Dalton’s work and for those who might want to investigate the pillars of Salvadoran and Central American literature and culture. It is magnificent news for the new generation of Salvadoran intellectuals. This work will be in their hands so that they might appreciate it, study it and critique it; so that they might put it in its rightful place considering the era and the circumstances in which it was written.

So then, 32 years after he was murdered, Roque Dalton, his words, his ideas, his brilliant thought and his work shine like never before. The dissemination of his critical and reflective writing, which is the inheritance he left our nation, is the tribute we pay him day to day. Roque Dalton doesn’t need statues or sterile monuments to immortalize him; these only serve so that little street dogs might piss on them each day or, in the best of cases, so they might scratch their fleas.

Does any of Roque's family have info on his American father? Where he was born? Did he have any other children? etc.
Just curious. Roque is the thread that ties my historical novel together. I would love to know more about Winnal Dalton so I don't tell any out-and-out lies in my story.
Thanks,
Sherrie Miranda

So much of Dalton's life is unknown, particularly in his later years when he was moving a lot and often living underground. I think many details of his life will never be revealed. And many of them are distorted or apocryphal.

You can try asking his sons (Juan José's blog is linked on the right, and Jorge can be found on Facebook). You should try to find the following biography of Dalton, which has some information about his parents: Luis Alvarenga, El ciervo perseguido: Vida y obra de Roque Dalton (San Salvador: Consejo Nacional para la Cultura y el Arte, 2004).

Thanks for reading. Yes, I'm on both: http://twitter.com/venepoetics