The Garden of Forking Hallways 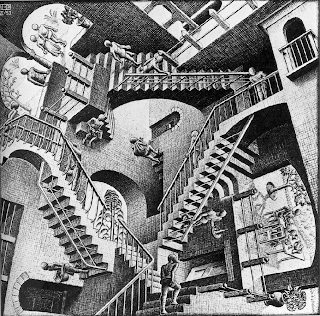 I have become a conjurer of seasons.
I hold in my hands that fraction of a second.
I ignore what came before and after.
Mario Morenza
Pasillos de mi memoria ajena
There are those who think that nothing is written without being about the author himself. No matter the genre chosen, the topics favored or the unquestionable marks of style, all acts of writing contain an individual battle for deciphering one’s own labyrinths, for making out of the ink on paper a very personal Ariadne’s thread, at once escape and minotaur. This labyrinthine image, a somewhat cliché borrowing from Greek mythology, accompanies the present reading of Pasillos de mi memoria ajena (Caracas: Monte Ávila Editores, 2007), the first publication by the young writer Mario Morenza, and it serves as a point of departure for certain reflections that are evident in the work.

One would have to begin by stating the obvious: Morenza seems to be conscious of the labyrinth he offers us, of his proposal for a complex and rigorous writing, which he sometimes catalogs as a diary, other times as a novel, but which he structures like a compendium of tales, or perhaps even like a personal collage: a sort of written Frankenstein built out of the textual snippets he was able to find dispersed in notebooks and journals. As with every labyrinth, Morenza’s tends toward dispersion, undoubtedly imitating the capricious prancing of memory, which leaps from one remembrance to another without any apparent fixed and coherent path; and at the same time he submits the very language that constructs it to a chain of mutations, of alterations in register and of apparent entrances and exits from the terrain of fiction, as though the text were trying to destabilize itself and become something new, something whose forms demand, as a first step, the demolition of all linear trajectories. Morenza’s hallways, present in the title of the work itself, are the routes of entry and escape from that personal chaos we tend to call memory, they are a possible direction amidst deviation: family, friends, one’s own personality, the Escuela de Letras at the Universidad Central de Venezuela, the very writing of the book that is being read; Morenza uses himself openly as prime material, in what could be considered a narcissistic gesture by the author, whose work erects for him a golden seat of honor in his own world, or also as a sacrificial outburst: the author presents his own life as a holocaust for fiction.

In this manner, the work’s hallways lead once and again to the author: they are perhaps an attempt to provide himself with an order, to create a map of the labyrinth in which he lives, in hopes of guiding himself toward an exit. This is why the photographs, charts and drawings that illustrate various sections throughout the book turn out to be a series of elements of intimate accompaniment, that contribute for the purpose of drawing a portrait of Morenza himself, in the same way in which a child’s free drawings in a notepad might; but at the same time they constitute elements of collectible meaning, dispersed in the labyrinth as though a family album lay beneath the tale. Because underneath it all there is a curatorial gesture in this deployment of personal forces, and Morenza himself makes note of it in the text that serves as an introduction, “I Can Speak”: “I want to protect my memory from the world so that it won’t continue to be, in this sublime moment, the same or more remote than what it’s already been. No one will interrupt me while I speak to myself.” (6)

This overwhelming introspection involves a risk similar to that of an intimate diary or a confession: the author must choose from among multiple scenarios –hallways– of his life what to tell and what to hide, and in what specific sequence narrate what he chooses. He clearly runs the risk of granting the most superfluous anecdotes an false air of transcendence, or of betraying life –as if the latter were of any concern to the reader– and of attributing to himself an agreed upon, treacherous and convincing memory. But, isn’t this exactly what one does when writing? Isn’t the narrator’s voice always treachery, as it recalls events it never witnessed and never will?

In any case, Morenza assumes this risk and allows himself to be misplaced in this new memory of his, a memory that is both his own and someone else’s. This what probably stands out the most in this book, and offers a certain consolation to the reader who faces the 270 pages of a text that wanders among various genres and which can occasionally discourage its reading, with its close-ups that are too prolonged: the daring versatility of the whole, that often allows its fragments to be taken separately as a type of mosaic or meccano. “Vitrum” and “Demons in the Backyard,” in fact, two of the best tales in the work, are texts that can be appreciated on their own, and whose inclusion in Pasillos de mi memoria ajena provides, more than meaning or clues or alignments, a series of enigmas and questions whose answer we must seek out in the previous blocks, taken from the author’s own life. A game of unfoldings that will culminate in the dialogue between a Mario 8236 and a Mario 8237, versions perhaps of clone travels across the labyrinth of a memory that is now foreign.

One could, finally, say that Morenza wagers for making the life a tale, or for erasing as much as possible the border between the two; traces of bravery and of a certain writerly pride that is surely surprising when found in a young writer, even more so when this is his first book.