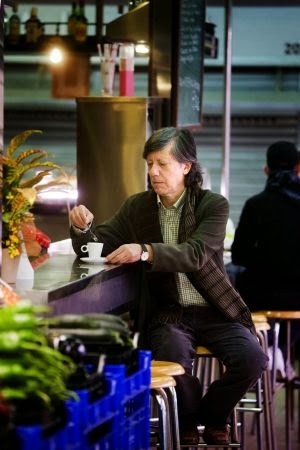 
Ednodio Quintero (Las Mesitas, Trujillo state, Venezuela, 1947) has been on vacation for a few days in a wild place in the high peaks of the Venezuelan Andes. The same one that saw him born when there was no electricity or cars, “a zone with a Medieval imaginary and customs” for which he feels grateful. There is a curious relationship between the author, who occupies a place among the greats in the literature of his country, and geography. His father had a political position as a registrar that forced his entire family to continuously move around, and Quintero’s first memories are tied to a type of chronology of places. Afterwards, other memories have come linked to the great cities such Mexico D.F., Paris and Tokyo, all of which he confesses to admire.

But critics describe the austere and hallucinatory landscape of his childhood as being inseparable from the cadence and register of his very personal voice. Despite that deep connection to the land, some miss the target by mistakenly trying to find biographical references in Quintero’s literature. Or subjectivities. Or classifications. He has cultivated all types of work: novels, essays, movie scripts and those tales of disconcerting borders whose second compilation has now been published by Barcelona’s Editorial Candaya in Ceremonies, after the first one titled Combates (1995-2000). The stories in the latest volume were written during the twenty year period between 1974 and 1994 and they represent that purely literary universe to which he has aspired. He doesn’t play down his effort or laziness along the way. “It’s hard for me to be a realist author. I put dreams, reality, personal experience in a blender... It’s a gift that some God has given me, even though I’m polytheistic...,” he says on the phone from Venezuela’s Mérida, where he now lives. It’s a matter of “the imagination at the service of nothing, literature in its most pure and savage state.”

“I remember a dream I had when I was four years old. A demon was chasing me and I found myself escaping; hidden in a cloud I took off flying,” he recalls. In an almost casual manner, the author directly highlights a great pursuit in his life: freedom. “It’s the value I defend the most,” he clarifies. Quintero mocks the vanity of artists, those who depend on their ego, which is something that makes him “laugh,” as well as the servitude that comes with certain “leonine contracts” from publishing houses that demand periodical publications. In order to publish El hijo de Gengis Khan (Seix Barral, 2013), a successful novel in Venezuela, he had to wander around for six years to various publishing houses and even then, he declares without resentment that he’s “like a 19th century writer.” “Today there’s an anxiety for fame. My good friend César Aira ironically recommends that in those cases you should publish first and write later...”

Nor does he seem to wear a watch on his wrist. He went for ten years without writing and he explains how he took advantage of that time to “read the classics” and to fill himself up “with lots of music.” “It’s hard for me to see myself as a writer and I don’t have the discipline... like that of a functionary. I write in bursts.” While he sarcastically assures me that people scold him because he spends his money or because he gives it away too quickly, at the same time he says he’s frightened by another, very different loss, his reason. “I fear mental deterioration.” And he adds, clarifying the fact that he’s joking: “I might commit suicide if I get Alzheimer’s, if I can remember where I put the gun...”

For this lifelong voracious reader, among whose memorable readings he treasures Don Quixote which he went through “almost in one sitting,” movies have been another great love and an important influence on his writing: “My fiction works through images, I like Westerns a lot....” One of them actually serves to illustrate the point: Ednodio Quintero says he goes into places and functions “like a scanner” of everything that enters through his eyes. Sight is the star among his senses.

The author’s short stories speak of a vital struggle sustained by heroes whose resistance is narrated from an insurmountable interior and through the first person “which provides much more verisimilitude and is much stronger.” If the topic of the strength and the struggle that carve his literature is addressed, Quintero supports himself with a religion he’s made to fit his measure: “Being alive is a miracle... Existence is given to us for a brief time not so much for our enjoyment but rather for learning.”

And he makes it understood without any qualms about the modesty of his response that if he considers himself a survivor it’s also because of the Venezuela he inhabits. “We’re still here, we won’t give up.” He was told that his book El arquero dormido. Cinco novelas en miniatura (Alfaguara) “had been a premonition of what happened afterwards, the strange experiments of 21st century socialism, out of step with the times.” He repeats the words that point to a resistance so as to shore up strength against that “hesitancy” about discussing the topic of Venezuela after Hugo Chávez, “because dirty laundry should be done at home.” “We’re navigating in a strange experiment here that could wander off into something dangerous.” One of the examples he offers as to how the people who think like him keep themselves afloat is the emergence of independent publishing houses that have established their own circuit in his country or the activity that goes on in social media.

“The European viewpoint seems strange to me, very complacent for some reason (towards the Government of Venezuela) because there’s an anti American sentiment you can see in the press....” “They would have to experience the reality here.” Quintero mentions “the unhinged economy, the inflation,” the practical muzzle placed on the mouths of those who disagree, not because they’re prohibited from expressing their opinions —“there’s no persecution like in dictatorships”— but because the official media have appropriated everything.

“I’m not very hopeful that there’ll be any changes soon but people have been waking up little by little.”