Guillermo Sucre or the Indelible Country 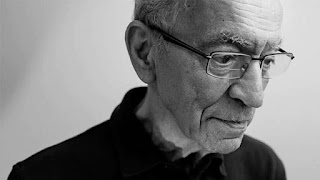 In today's Venezuela, writers and intellectuals die without receiving any official recognition, even when they've worked as state functionaries. The pain, the sorrow, the exercise of remembering their works, is reserved for their followers, their students, their readers. Waves emerge suddenly, from within an atomized society, to fill the void of lost forms, basic protocols: it is the disconsolate students who lament the loss of a great teacher. We've once again lived through these scenes since last Thursday, July 22, the day of his death. This time it corresponds to Guillermo Sucre, Venezuelan poet, essayist and critic born in 1933, one of the essential figures of what's known as the Generation of 58, that legion of novelists, poets, playwrights and essayists that emerged alongside the recuperation of democracy after the fall of the dictator Marcos Pérez Jiménez.

If any career fit Sucre's temperament, being an educator suited him best: teaching, in the context of leaving a legacy, was for him a civic vocation, a tool that guarantees the continuity of the republic. That impulse, moreover, avoided provincialism, and clearly aimed at a universal vision: his word always opted for recognizing in the literatures written in Spanish a great system of exchanges and confluences, that is, a single map on which one reveals peaks, plains and overflowing rivers. The professor, yes, his most public aspect, because as a poet, the most intimate sphere, he said very little, despite being one of our giants of the 20th century. He was so extreme with himself, with his own voice, that he hid his books in peripheral editions (the more austere, the better), under a sort of impulse where the draft was more valuable than the expression itself. Which might explain why it was easier for him to talk about others, the great Latin American poets, rather than himself. The plot he made his own like few did (the choral verb of a continent) was his mirror: always seeing himself through others (the other voices) to erase his own semblance.

A unanimous judgment tends to recognize La máscara, la transparencia (1975) as a unique book, ahead of its time: in its pages the author brandishes, maybe for the first time, the integrated map of 20th century Latin American poetry, as no one had ever seen or conceived it before. I recall during my first reading of the book as an adolescent, I underlined a phrase that more or less said: "It's no longer a matter of making an inventory of being, but rather inventing it." It was a license to throw aside the Adamic vision that follows us, ever since the chroniclers of the West Indies: naming the world according to its flora and fauna. In more recent words, Sucre has spoken about being a subject of history, if not an object. And this is why the gains of subjectivity, above all in poetry, are no small feat: an exercise in emancipation, where verbal freedom becomes all-encompassing. That saying, used by the teacher Sucre to incite new poets, might explain why Venezuelan poetry reaches a peak in generations following his own, because if we're speaking about decisive genres, I doubt there's a better one than what's being written today thanks to Cadenas, Montejo and Sucre, teachers who have left us an indelible legacy.