Carolina Lozada: “No one emerges unscathed from writing” 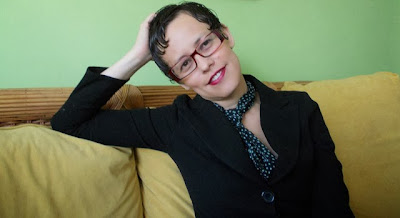 The name of Carolina Lozada (Valera, 1974) has been present in the circuits of literary promotion in Venezuela for a while now, even if they privilege work produced in Caracas above other important cities and states. Not just for having received a variety of acknowledgements, such as the Premio Municipal de Narrativa “Oswaldo Trejo” (2006), the Premio Nacional de Narrativa Solar (2007), the Premio para Jóvenes Autores de la Policlínica Metropolitana (3rd place in 2011) or the Premio Stefania Mosca in the category of non-fiction (2011), but also for her tenacious and constant oeuvre that, already counting four books of short stories published: Historias de mujeres y ciudades, Memorias de azotea, Los cuentos de Natalia and La culpa es del porno, and one of literary non-fiction: La vida de los mismos, establishes itself in the pursuit of its own imaginaries, equally distant from the mandates of literary fashion and from the exaltation of the local and the provincial. Her participation, moreover, in digital projects like the magazine Las Malas Juntas or the literary review site 500 ejemplares, demonstrates that one doesn’t have to live in the capital to be a part of the country’s literary panorama and, why not, of the continent’s.

Carolina Lozada: There’s no premeditation or forethought in La culpa es del porno. Without proposing to, the masculine voices began to impose themselves in nearly the entire book. The stories simply came to me and the majority of these were enunciated by male characters and by a few transvestites, as in the story “Libertad Queen,” for example. Regardless of the sexual gender, I’m interested in exploring through fiction the worlds of socially uncomfortable beings. I’m attracted to characters who couldn’t even be categorized as losers because they never had anything to lose. On the other hand, sexual ambiguity also piques my curiosity: to think of a man dressed as a woman in the privacy of his room while on the street or in front of his family he’s an exemplary man, what might pass through his head, this intrigues me. Maybe the transvestite element of that type of subject and of others in a similar vein imposed itself in my narrative voice. No one emerges unscathed from writing.

GP: In these stories the “normal” world, that is apparently under control, is always represented as obeying an aesthetics of the grotesque, the carnivalesque, as if wanting to highlight the ugliness or ridiculousness of the entire world, not just of the protagonist characters.

CL: Order, the correct, extreme neatness all make me suspicious; when I encounter these models of perfection I incite my nose like a dog to sniff out the dark side. I like to check under the carpet to find the miseries we try to hide and when I work on this I do it from the perspective of tragicomedy; human beings are so inhabited by it... I suppose this anxiety translates into an aesthetic that finds its basis in sarcasm, irony, the abject and the grotesque.

GP: Is humor part of a desire for social satire, or could it be more of a mode of resistance for the characters facing the humiliations and adversity they suffer, a means of naturalizing their pathetic nature?

CL: Humor is the weapon of the weak, it’s the ace under the loser’s sleeve, which though it might not make him win the game, it at least allows him to face defeat without having to go to a bridge with a stone tied to his neck. When faced with power’s clamorous discourse, humor functions like the little men stabbing the ferocious and clumsy cyclops. In moments of unbearable pressure, humor serves as an escape. And yes, I like that idea of humor as resistance.

GP: The other big theme of the book seems to be love, which you sometimes catalog as an “…arduous compliance,” a power capable of “... turning us into the most pathetic beings.” Do you locate love in the opposite spectrum of those freeing impulses, such as humor? Is there a struggle between freedom and love?

CL: I don’t think love is the other big theme of the book; on the contrary, I think it’s the great absence, it’s the brutal lack. Precisely, the examples you chose speak of the lack of love for oneself: the characters in La culpa es del porno are desperate beings, beggars for affection, capable of submitting to embarrassing humiliations and deranged manipulations just to receive some attention, not even love, but attention. Now, we could talk about the presence of love from its absence, perhaps desire frustrated by what doesn’t exist, but I’m not interested in narrating conventional love relationships, it bores me to read and write about couples with traditional amorous conflicts (he leaves her, she wants to leave him, etcetera), I prefer to wander around, looking for the freak point in those conflicts. This is the source of the mechanization, fetishism, mania, tragicomedy that some of the characters in this book suffer.

GP: And up to what point can that insistence on the twisted, on the affected be read as a pursuit of originality, of the anecdote that stands out because of its intricacy? Or is it instead a wager for morbidity, for the narrator’s intrusion (and thus the reader’s) in the character’s intimate panorama?

CL: When you set off to tell a story you don’t think of wagers or pursuits. You simply obey that tickling that pushes you to narrate something. When you do it the fixations are brought to the surface, but that’s a matter for the meddlesome Freud or any one of his boys. At the moment I’m interested in narrating from the perspective of the twisted (I like that term), it’s alluring for me to enter that dark room of sordid, pathetic characters. Maybe in the future I’ll want to write stories about paranormal powers, maybe when I’m old I’ll find shelter in alchemy and I’ll end up narrating mystical nonsense. You never know.

GP: And what other projects occupy your interests? What’s next for Carolina Lozada?

CL: I have a little book called El cuarto del loco, in which I try to narrate from the perspective of being locked up, delirium and the absurd. I also continue to work on my Animales domésticos, a book of short stories that I’m constructing with situations and characters that are cornered by the paralyzing omnipotence of power, beings who are submitted to a schizophrenic reality. Those are the alleys I’m passing through at the moment.