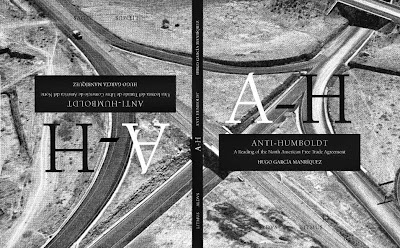 New books of poetry that include a crucial search are rare. Anti-Humboldt: A Reading of the North American Free Trade Agreement (Aldus/Litmus Press, 2015) by Hugo García Manríquez is perhaps the most interesting poetry collection by a Mexican at the beginning of this century.

García Manríquez, additionally, is a systematic translator, as evidenced by his versions of William Carlos Williams’s Paterson and Clayton Eshleman’s Juniper Fuse: Upper Paleolithic Imagination & the Construction of the Underworld, along with his participation in an anthology of poetics by Charles Bernstein.

Just for his work as a translator alone, García Manríquez should be more well-known. But we already know how contemporary Mexican literature works: it does everything to cover up reality.

Besides, does García Manríquez belong to the Mexican literary tradition? As I’ve said on another occasion, the first part of his oeuvre does. But Anti-Humboldt is in another orbit.

García Manríquez migrated to the United States and his work is closer to North American experimentalism than to the Mexican “tradition of rupture” (Octavio Paz).

And if someone thinks that one does not exclude the other it’s because they belong to the Tradition of Rupture, which is to say to the PRI political party (the Institutionalized-Revolution).

In Anti-Humboldt, García Manríquez took the text of the NAFTA and chose words and phrases, a few per page, to make a constellation of poems. The technique combines appropriation and erasure. His selection is read in bold and the rest of the text in faint grey letters. He does it with the Spanish and English texts of the NAFTA.

Its first dimension is to offer a form of reading the Agreement; a dangerous form but one that neither defends it nor demonizes it. He makes it speak and stutter, opening fissures in it.

In its other dimension, a writing occurs in which the Agreement becomes a stage to name beings and describe relationships; a screen of interweaving.

The lexicon of commerce, fragmentation and García Manríquez’s vision achieve something that would normally seem difficult: to make poetry by quoting articles from NAFTA.

A paratactical poetry, which at times seems hermetic; as if by highlighting them pieces of NAFTA were shouting something in segments.

It’s not a coincidence that the epigraph is by George Oppen: one can hear him in this book, as is also the case in Language Poetry and appropriationism. (The epilogue provides reading clues and directions.)

Its verbal material escapes Spanish-language lyricism; starting with the cold vocabulary of neoliberal commerce and his editorial technique, García Manríquez makes the transborder agreement itself provide a testimony of the damage.

With Anti-Humboldt, García Manríquez opens a path towards a cruel ecopoetics, a bilingual experimentalism and a new prosody.

There’s something merciless in this work: it instantly makes nearly all of Mexican poetry anachronistic; that it does this by means of the specter of NAFTA makes it doubly macabre.